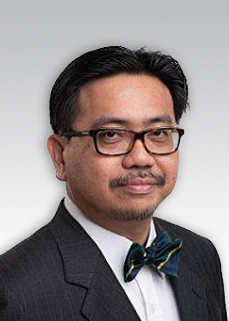 As an arbitration specialist, he is regularly sought by clients to assist in the handling of complicated disputes that requires high degree of confidentiality and discreetness. For instance, he is currently assisting the government of a major developing country on a sensitive industry dispute. Previously, he was retained to provide guidance and advice on matters arising from the termination of a legacy contract which could have led to a multi-billion arbitration. He is also Chairman of Arbitration & International Dispute Resolution Practice Group of ASEAN Legal Alliance, a private network of law firms each of the ASEAN countries coming together to offer a seamless delivery of legal service across a diverse cultural, geographical and legal backdrop. In addition, Professor Ngo is also a Member of the Ethics Council (‘Dewan Kehormatan’) of the Association of Indonesian Advocates (Persatuan Advokat Indonesia, ‘PERADIN’), member of the AAA/ICDR Asia Advisory Board and member of ICC Singapore Arbitration Group. Over the past decade, he focusses on India, Indonesia and China, three key growth economies of Asia and South East Asia, including initiatives relating to Belt & Road Initiative (BRI) and ASEAN Economic Community (AEC).

He has advised public and private entities not only on post-dispute matters but business negotiation, mediation and dispute management. He has been involved in oil and gas, energy, investment, joint venture,telecommunications, shipping, mining, financial services, international trade and construction. Professor Ngo has extensive experience in dealing with parties from all over the world, bringing strong cross-cultural proficiency not only to international dispute resolution processes but also business strategizing. In the course of work, Professor Ngo has developed experience and understanding in dealing with the private sector, listed companies and public sector in South East Asia, South Asia, East Asia, Europe, the Middle East, Russia, North Africa, North America, South America and Australasia. Professor Ngo has been involved in matters involving arbitration rules of, among